Armenia says one of its fighter jets was shot down by a Turkish jet, in a major escalation in the conflict over the disputed Nagorno-Karabakh region. 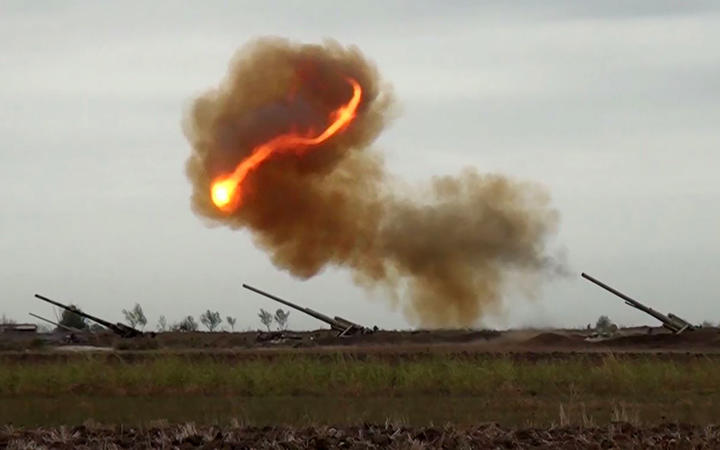 The Armenian foreign ministry said the pilot of the Soviet-made SU-25 died after being hit by the Turkish F-16 in Armenian air space.

Turkey, which is backing Azerbaijan in the conflict, has denied the claim.

Nearly 100 people, including civilians, have died in three days of fighting over the disputed mountainous region.

The enclave is internationally recognised as part of Azerbaijan, but has been run by ethnic Armenians since a 1988-94 war between the two former Soviet republics.

Azerbaijan has repeatedly stated that its air force does not have F-16 fighter jets. However, Turkey does.

The fighting that started three days ago now appears to be spilling out of Nagorno-Karabakh.

Armenia and Azerbaijan – which have already mobilised more soldiers and declared martial law in some areas – blame each other for starting the fighting.

While Turkey is openly backing Azerbaijan, Russia – which has a military base in Armenia – has called for an immediate ceasefire.

“Armenia should withdraw from the territories under its occupation instead of resorting to cheap propaganda tricks,” Turkish President Recep Tayyip Erdogan’s aide Fahrettin Altun said.

In 1988, towards the end of Soviet rule, Azerbaijani troops and Armenian secessionists began a bloody war which left Nagorno-Karabakh in the hands of ethnic Armenians when a truce was signed in 1994.

Tens of thousands died in fighting, and many ethnic Azerbaijanis were forced to flee their homes.

It is now a de facto independent region, relying heavily on support from Armenia. But it is not recognised by any UN member, including Armenia.

Swathes of Azeri territory around the enclave are also under Armenian control.Negotiations have so far failed to produce a permanent peace agreement, and the dispute in the region remains one of post-Soviet Europe’s “frozen conflicts”.

Karabakh is the Russian rendering of an Azeri word meaning “black garden”, while Nagorno is a Russian word meaning “mountainous”. Ethnic Armenians prefer to call the region Artsakh, an ancient Armenian name for the area.

Over the years both sides have had soldiers killed in sporadic breaches of the ceasefire. Landlocked Armenia has suffered severe economic problems due to the closure of borders with Turkey and Azerbaijan.

Russia, France and the US co-chair the Organization for Security and Co-operation in Europe’s Minsk Group, which has been attempting to broker an end to the dispute.