A British zoo has had to separate a group of five African Grey parrots because their language was too strong for younger visitors.

The parrots – named Eric, Jade, Elsie, Tyson and Billy – are residents at the Lincolnshire Wildlife Park having all been rehomed there from different owners.

Park chief executive Steve Nichols told Morning Report the keepers at the park were given a bit of a warning about what they were in for. 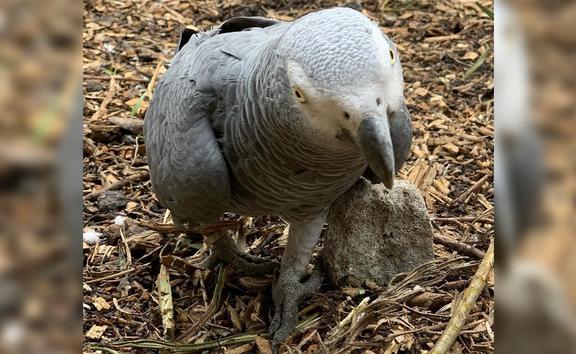 He may look cute, but he’s got a mean mouth. Photo: Facebook/Lincolnshire Wildlife Park

“They’ll turn around and tell you exactly what they like to eat and what their favourite toy is and then just as they fill the form in, you’ll get that little quiet voice where they’ll turn around, say ‘I do apologise, but Billy does actually have a few choice words as well.'”

Swearing parrots aren’t exactly new though and Nichols said the staff laughed it off, but he soon discovered the problem was worse than first thought when he found himself working in an office next to the quarantine area.

“I actually thought it was some rowdy keepers that we’ve got that I thought they were getting a little bit over the top with each other,” he said.

“I went in the room to explain to them to stop, just quieten it down a little, and was very shocked when I walked in and there were no people there it was just parrots.”

It was hard for the park’s human inhabitants to not join in too.

“It is so difficult not to laugh when you’re walking past and one of the parrots just swears, just literally blurts it out. You can’t help but laugh, you know, it’s just impossible not to.”

But for Nichols it soon became a bit personal. The parrots came to recognise him and soon came up with their own nickname for him.

“When I walk past they’ll shout ‘oi you fat tw*t’ and it’s like, ‘I’ve just lost two stone that’s very nice, why are you saying that?”

On top of that it was becoming a problem for the park’s visitors.

“We can’t really have it for the children,” Nichols said.

“It’s not very nice when the children are going back to nanny and asking what this word is that this parrot said.”

The group have all been moved to different parts of the park where they can’t talk to each other and cause problems.

The Camille Sweater is the type of easygoing layer you can…

Mariposa has some unique glove options to keep your fingers

If you haven't stopped by The Emporium by Mariposa yet, it…