Myanmar’s military rulers have shut down the country’s internet as thousands of people joined the largest rally yet against Monday’s coup. Protesters in Yangon in one of the largest rallies yet against the coup in Myanmar. Photo: AFP

A near-total internet blackout is in effect with connectivity falling to 16 percent of ordinary levels, said the monitoring group NetBlocks Internet Observatory.

Police with riot shields have blocked the main roads into the city centre.

Many users had evaded the restrictions on social media by using virtual private networks (VPNs) but the more general blackout severely disrupted that.

Human rights group Amnesty International called the shutdown “heinous and reckless” and warned it could put the people of Myanmar at risk of human rights violations.

The military has not commented. It temporarily blocked access to the internet following the coup on 1 February.

On Saturday morning, protesters – including factory workers and young students – called for the release of those detained by the army, including elected leader Aung San Suu Kyi.

They marched through the streets of Yangon as city buses sounded their horns in support.

Bystanders flashed the three-finger Hunger Games salute, which has become a symbol of defiance against authoritarianism, while residents clapped or banged pots and pans on their doorsteps.

Many households have also been displaying red stickers in their windows in support of Suu Kyi’s National League for Democracy (NLD) party, the BBC’s Burmese editor Soe Win Than reports.

Police with riot shields used barbed wire to block roads and water cannon were put in place in some areas as a precaution, but the demonstration reportedly remained peaceful, with no attempt by protesters to pass police lines. 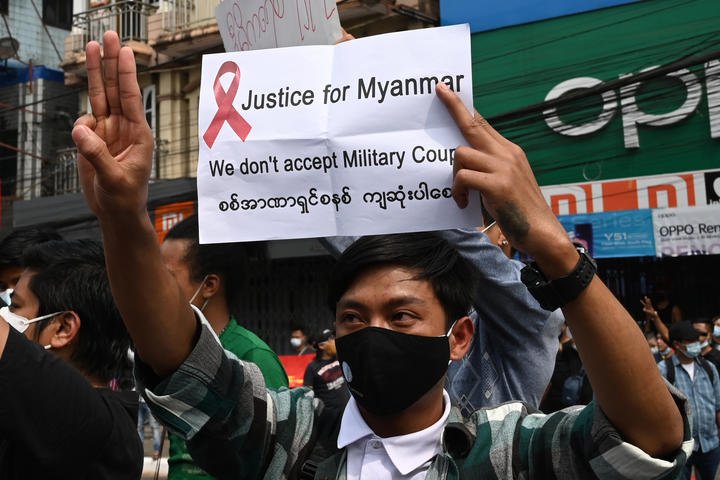 A protester in Yangon flashes the three-finger salute, which has become a symbol of defiance in the region. Photo: AFP

Demonstrators gave police roses and bottles of drinking water, calling on them to support the people not the new regime.

One female protester, who asked not to be named, said she would not accept the “unjust seizing of power”.

“Because of military dictatorship, many of our lives have been destroyed,” she said, adding: “We cannot allow our future generations to meet the same fate.”

Speaking from Yangon, Britain’s ambassador to Myanmar, Dan Chugg, told the BBC that people were taking to the streets in increasing numbers.

“The grief and the sadness of the last few days is gradually turning to anger,” he said, adding: “Doctors are refusing to work and civil servants have been refusing to work… There’s quite a sense around the country of unhappiness at what’s happened – and outrage.”

Myanmar – also known as Burma – has remained mostly calm in the aftermath of the coup, and there were no immediate reports of violence after Saturday’s protests. More demonstrations were expected to be held later.

The military authorities are hunkered down in the capital, Nay Pyi Daw, and have so far avoided direct engagement with the protesters.

The BBC’s Nyein Chan in Yangon says the Burmese know very well the violent crackdowns that the military is capable of. The country was ruled by an oppressive military government from 1962 to 2011.

But now that people have had time to digest what is happening, they are finding different ways to get their voices heard, our correspondent says.

Suu Kyi is under house arrest, according to her lawyer. Police documents show she is accused of illegally importing and using communications equipment – walkie-talkies – at her home in the capital.

The coup took place as a new session of parliament was set to open, following November’s landslide election win by the NLD party.

Many Burmese watched the events unfold in real time on Facebook, which is the country’s primary source of information and news. But three days later, internet providers were ordered to block the platform for stability reasons.

Following the ban, thousands of users were active on Twitter and Instagram using hashtags to express their opposition to the takeover. By 22:00 local time (15:30 GMT) on Friday access to those platforms had also been denied.

There was no official word from the coup leaders but AFP reported it had seen an unverified ministry document that said the two social media sites were being used to “cause misunderstanding among the public”.

A spokeswoman for Twitter said the ban undermined “the public conversation and the rights of people to make their voices heard”. Facebook, which owns Instagram, called on the authorities to “restore connectivity”.

Myanmar at a glance

Myanmar is a country of 54 million people in South East Asia which shares borders with Bangladesh, India, China, Thailand and Laos.

It was ruled by an oppressive military government from 1962 to 2011, either directly or indirectly, leading to international condemnation and sanctions. Protesters have been calling for the release of those detained by the army, including elected leader Aung San Suu Kyi. Photo: AFP

A government led by Suu Kyi came to power after free elections in 2015. But a deadly military crackdown two years later on Rohingya Muslims sent hundreds of thousands fleeing to Bangladesh.

It triggered a rift between Suu Kyi and her previous supporters in the international community after she refused to condemn the crackdown or describe it as ethnic cleansing.

But she has remained hugely popular at home, shown in her party’s landslide win in the November election.