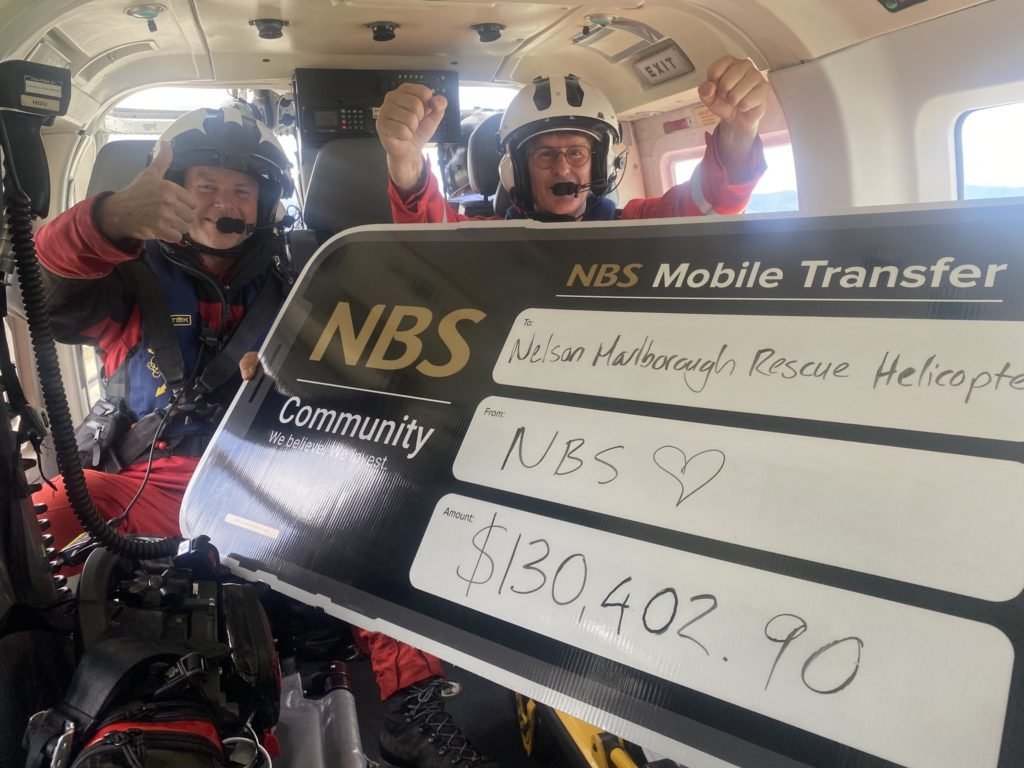 The Top of the South community has given a major boost to one of the region’s most vital services, the Nelson Marlborough Rescue Helicopter.

Paula said the fundraising was an incredible effort, exceeding expectations at a time when rising inflation and household costs are putting pressure on people’s discretionary spending.

“We are so grateful to everyone who got involved in this year’s campaign who drove a number of activities that really made a difference to the final total”. Local businesses such as Lambrettas, Salvito’s, Nelson KIA, MD Outdoor Sports, Kismet, the Action Centre and Richmond Fresh Choice donated a percentage of their sales to the appeal, whilst other organisations donated in kind. Gibbons also made a significant donation at the end of the campaign.

“Thank you also to everyone who took part in the #NBS10for10 press up challenge, donated online, or who gave their time and skills, such as the women who sold their jams and chutneys at a roadside stall. We thank everyone for their generosity. It truly has been a magnificent community effort.

“We are very much indebted to NBS for supporting this appeal for the third year running and to our other corporate sponsors who make a real difference in keeping the rescue helicopter and its crew in the air and saving lives.”

NBS Chief Executive, Tony Cadigan says the inclusion of the fun #NBS10for10 Challenge in this year’s appeal was a way that people could show their support without having to donate. The challenge asked people or groups to post a video of themselves doing 10 push-ups and passing on the challenge. For every video posted, NBS donated $10 to the appeal.

Tony says of this year’s appeal: “I am absolutely delighted with the increase in funds raised for the Trust. We were proud to be able to get the Tasman Mako involved in challenging our community to take part in the #NBS10for10 Challenge and through this we’re happy that we could engage with the wider community to raise awareness of the vital work of the rescue helicopter. I’d also like to thank the hundreds of NBS clients who engaged with the appeal by supporting a term investment special we ran during the month of October.”

Summing up the impact that this appeal total will make to the Rescue Helicopter Trust, Paula says:

“Last month, we responded to 43 missions across Te Tauihu. It was humbling and heart-warming speaking to the crew involved when hearing the positive outcomes and what it meant to them. One crew member literally held up a piece of equipment that we had just purchased, and they told me that it directly saved two lives. We are all in this together as a community and we can make a real difference thanks to the support of NBS and our family of sponsors and supporters.”