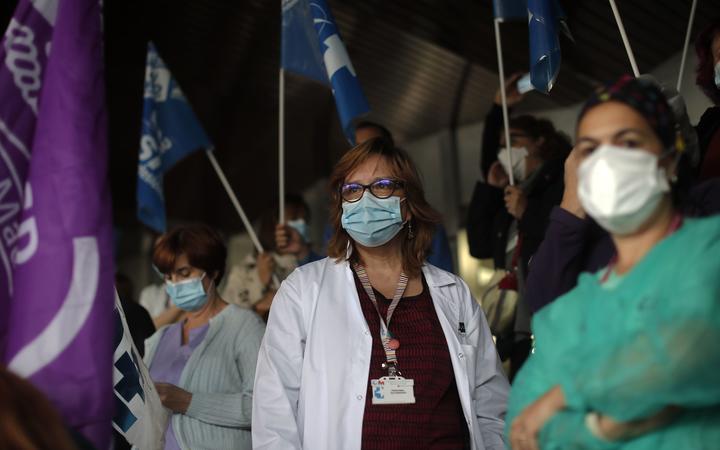 Spanish healthcare workers protest in Madrid over their increased workload due to Covid-19 Photo: AFP

Today the country reported 16,973 infections and 156 deaths in the previous 24 hours.

Since its first diagnosed case on 31 January, Spain has recorded a total of 1,005,295 infections.

It is the sixth nation worldwide to report one million cases after the US, India, Brazil, Russia and Argentina.

Europe has seen a surge in new infections over the last few months, forcing governments to bring in strict new regulations to try and control outbreaks and ensure hospitals do not become overwhelmed.

Spain was hit hard by coronavirus in the first months of the pandemic, and brought in some of the strictest measures to tackle it – including banning children from going outside.

Like most European countries, the country lessened its regulations as case numbers dropped. Politicians highlighted the need to bring back tourists as a way to boost the struggling economy.

By the end of August new daily case numbers were rising by 10,000 a day. Hospital admissions have ticked up by 20 percent in the past two weeks alone, while deaths have also begun to rise, with the toll climbing by 218 yesterday.

In total, 34,366 Covid-related deaths have been recorded. Intensive care staff chat as they prepare to receive patients at a hospital in a suburb of Madrid. Photo: AFP

Many blame impatience to be rid of state-imposed restrictions meant to contain the virus, or weariness with social distancing guidelines.

“We are less responsible, we like partying, meeting with family,” said banker Carolina Delgado. “We haven’t realised the only way… is social distancing, simple things like not gathering with many people, wearing masks even if you meet friends.”

A hurried exit from confinement before tracing systems were in place let transmission get out of hand faster than in other countries, said Dr Rafael Bengoa, co-founder of Bilbao’s Institute for Health and Strategy.

Lawmakers are bitterly divided over how to handle the situation. Politicians in the national parliament were debating a no-confidence motion in Prime Minister Pedro Sánchez today filed by the far-right Vox Party, while central government has clashed repeatedly with regional leaders over how best to proceed.

“These politicians are only comfortable with the simplicity of short-term…, ideologically motivated debates, but the virus doesn’t care about ideology,” Dr Bengoa said.

Earlier this month, Madrid’s centre-right authorities successfully had a partial lockdown imposed on the capital overturned in court. But the Spanish government then ordered a 15-day state of emergency in the city.

The health minister will meet with regional leaders later today to discuss next steps.

In other European Covid news: