England’s biggest netball stars will be missing from the side that meets the Silver Ferns late next month for the first international Tests since Covid-19 disrupted the sport. 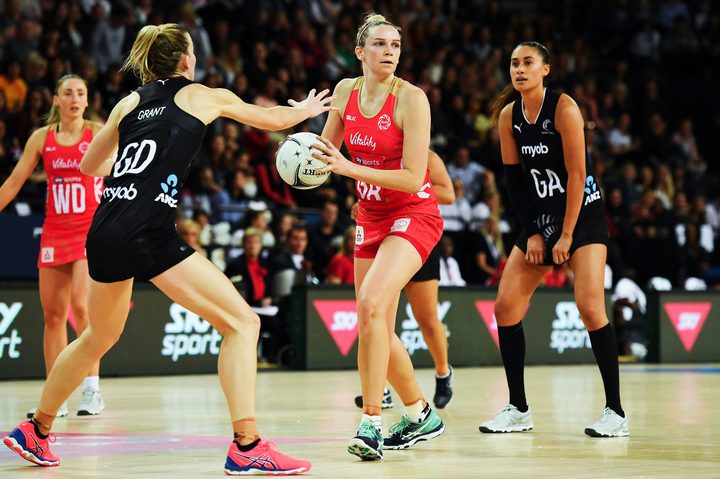 Head Coach of the Roses, Jess Thirlby has named 16 players who will travel to New Zealand to face the Silver Ferns in three Tests in Hamilton for the Taini Jamison Trophy.

The England side are set to arrive on 8 October, after which the team will quarantine for two weeks before facing the world champions on 28 October, 30 October and 1 November.

But the Roses, who are currently ranked third in the world, might struggle.

None of the Roses who currently play in the Suncorp Super Netball (SSN) league in Australia, including the likes of Helen Housby, Jo Harten and Geva Mentor, will be partaking in the series.

Nor will Natalie Haythornthwaite, and defenders Layla Guscoth and Stacey Francis after a condensed SSN season which also meant living in a quarantine ‘hub’ for an extended period.

The SSN league, which started late due to the pandemic, has its grand final on 18th October, which could potentially tie up a couple of the English players.

Thirlby said while they would miss them it was important they got the opportunity to rest both mentally and physically after an intense season.

Serena Guthrie, who had great success in both the New Zealand and Australian domestic leagues, is a world class player and is likely to be named captain for the series.

The well-travelled Jade Clarke is by far England’s most capped player with 176 Tests, while Kadeen Corbin adds experience to the shooting end with 70 caps.

Southern Steel fans will get a sneak peek of their recently signed import George Fisher, who is a tall target in the shooting circle.

Defender Fran Williams has shown huge potential for some time and will relish solid court time along with fellow defender Jodie Gibson.

Thirlby said the series was a massive opportunity for the team after what had been an extremely difficult period.

COVID-19, we weren’t sure whether we were going to get an opportunity like this in 2020.

“I am so proud of how well the Vitality Roses athletes and staff have handled training in a different environment and of how they have come together in uncertain times. I know they’re all excited to get out there now and to get playing.”

Thirlby said it was a great opportunity to blood some new talent in the lead up to a home Commonwealth Games.

“We’ve got a great pool of talent heading out to face the Silver Ferns, including some rising stars like Imogen Allison who is yet to gain her first senior cap, plus some household names such as Serena Guthrie who could achieve her 100th cap during the series and Jade Clarke who is the most capped England player.”

Thirlby said they were thankful for New Zealand hosting them.

“It can’t be underestimated what an achievement it is for both nations to enable this opportunity to happen, not only for both nations but for the visibility of international netball and female sport during such challenging times.”