The Australian government is being urged to create a new visa for Pacific Islanders to relocate permanently to Australia, in a bid to manage the impact of climate change in the region. 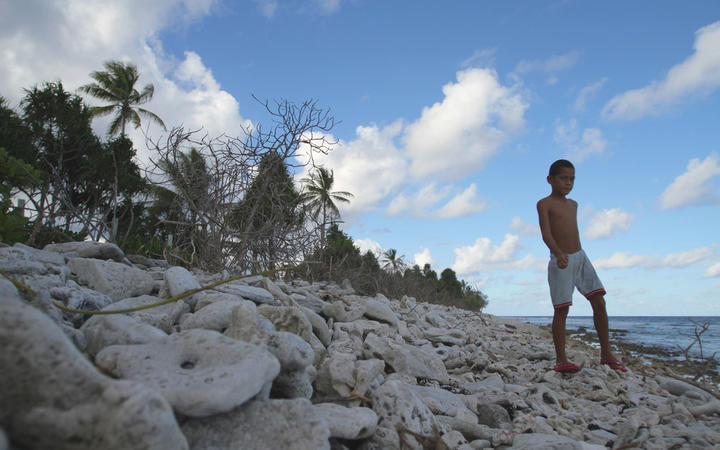 The recommendation was outlined in a new policy paper released today by the University of New South Wales’ Kaldor Centre for International Refugee Law.

The paper urges the government to do more to help neighbouring countries, with several Pacific island nations facing an existential threat from rising sea levels.

Co-author Jane McAdam said it was a roadmap for Australia to deal specifically with the displacement of Pacific Islanders as a result of climate change and natural disasters.

“What we do know is that because disasters are likely to increase, both their intensity and their frequency, it means that people’s normal adaptation capacity is being almost overtaken,” she told the ABC’s Pacific Beat programme.

“Things are happening too quickly for them to be able to respond and avoid displacement altogether.

The Carteret Islands were the first place in the world to require population relocations due to climate change, with predictions they would be submerged by 2015.

“If you look at where the trajectory is, unless you have major changes in mitigation and adaptation efforts, we’re likely to see more displacement occurring.”

Co-author Jonathan Pryke, from the foreign affairs think tank the Lowy Institute, told the ABC he recommended about 3000 permanent residencies for Pacific Islanders each year.

He said relocating even a small number of people on a voluntary basis would help ease pressure on vulnerable countries.

“We are advocating for a real drop in the ocean here with regards to our overall migration scheme,” he said.

“This is not a radical proposal, we’re not suggesting opening the gates to the region. It’s an important component of helping improve welfare in the region but also being an important mitigating tool for climate change displacement.” The Department of Home Affairs did not directly respond to the ABC’s question of whether it would consider a new visa scheme, but highlighted Australia’s existing migration pathways.

“Supporting our Pacific neighbours is a key focus for the government,” a spokesperson said in a statement.

“Australia welcomes the contribution that people from Pacific Island nations have made to Australia for generations.

“There are opportunities for individuals from Pacific countries to apply for a visa to permanently migrate to Australia through the skilled or family migration programme.”

Pacific visa could be a ‘win-win’, paper argues

The non-profit organisation said one person was internally displaced due to climate change every two seconds, and people were three times more likely to flee their homes due to climate-fuelled disasters than conflict.

Australia was criticised last year for thwarting efforts by small island states to get consensus on a declaration for stronger action on climate change and a rapid phase-out of coal. Pryke said the move would be in Australia’s national interest for a “stable and prosperous” region, adding the Pacific visa proposal was a “win-win”.

“These people come in and they are actually a boon to the Australian economy,” he said.

“They fill the labour shortage needs, they get fruit off the vine, they help in aged care and child care and other sectors. These people can remit money home, they can improve the wealth and prosperity of the nations they’re coming from.

“So it’s a win-win policy that comes at a very low expense to the taxpayer.”

The paper suggests Australia could use New Zealand’s Pacific Access visa as a model, which has 1750 places for permanent residency each year, selected by a ballot.

But the paper found demand was high, finding that “in the five years to 2014-15, the ratio of application numbers to available places was 16:1”.

Professor McAdam acknowledges the merits of Australia’s existing visa programmes, which allow Pacific Islanders to live and work in Australia on a temporary basis.

But she said offering permanent relocation would not only help at-risk Pacific countries adapt to climate change by taking the pressure of stretched resources, but it would also supplement Australian aid to the region.

“If only 1 percent of the Pacific’s population were permitted to work permanently in Australia, this would bring more benefits to the Pacific than Australia’s aid contribution,” the paper said.

Australia’s recent budget papers outlined $A4 billion in foreign aid, with more than $1.44 billion slated for the Pacific.

Professor McAdam said migration could be one way to tackle climate change, but said disaster risk reduction policies, climate adaptation development and other strategies are essential as well.

“This is a way of giving people options, a way of choosing their own destiny,” she said.

“The last thing that we are advocating for is the forcible movement of people to Australia. It’s not about that, it’s about giving people choices and arming them with the possibility to move in a dignified manner.”