This obscure looking firearm is actually a cable launcher designed in the 1920s for maritime rescue.
Initially owned by the Nelson Harbour Board it was used to attach lines for ship-to-ship or ship-to-shore rescue. The gun was able to fire a rocket carrying a 6mm line up to 300m in distance. A heavier line was then attached and could be pulled across the gap.
In the early 1960s the Nelson Harbour Board loaned the gun, expired rockets and line to the Waimea Electric Power Board for the installation of power lines. Previously workers had to cut tracks through thick bush to drag lines through gullies, not to mention the dangerous river crossings they faced. This tool saved numerous hours of hard labour, easily sending lines across gullies and difficult terrain.
In the 1980s the Harbour Board updated their rescue equipment and sold this unit to the Power Board who used it right up until 1993. In 2020, Network Tasman donated it to the Museum with documentation recording this objects story for future generations to enjoy.
To read more about this this intriguing object check out our blog : http://www.nelsonmuseum.co.nz/learn/2021/1/22spra
Port Nelson Tasman District Council South Canterbury Museum Mokau Museum Murchison Museum Golden Bay Museum Te Waka Huia o Mohua 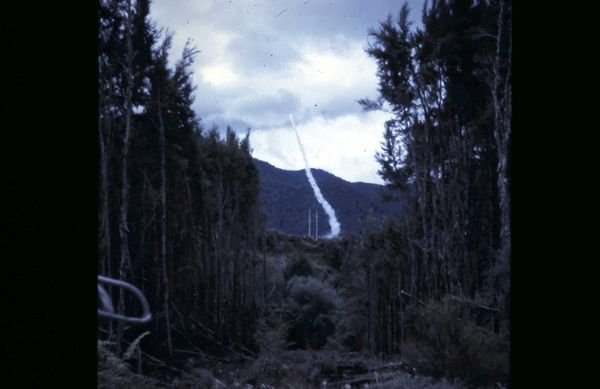 Objects frequently tell more than one story, and sometimes this is what makes the ordinary extraordinary.
The Museum’s latest acquisition is no exception.

This obscure looking firearm is actually a cable launcher which was designed in the 1920s by the inventor William Schermuly. Developed for ship-to-shore or ship-to-ship rescue, the Schermuly Pistol Rocket Apparatus (or SPRA for short) and its rocket launched cable allowed stricken crew to be hauled ashore in rescue buoys. 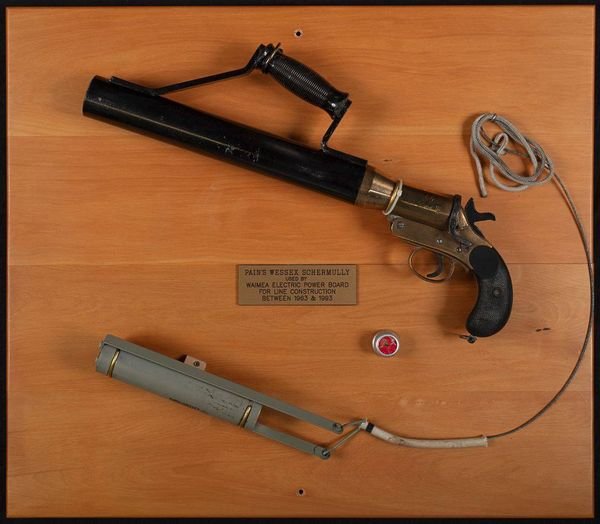 Although Schermuly’s apparatus became a popular and compulsory piece of maritime safety equipment from the 1930s onwards, rocket launched rescue cables had been in practical operation in New Zealand since the 1860s most notably by the “Timaru Rocket Brigade.” These rockets pre-date Schermuly’s first prototypes by 20 years. However, these cables were largely launched from shore-to-ship or from rescue boats rather than from the stricken ship itself.
This SPRA was first owned by the Nelson Harbour Board and was used aboard their tug until the early 1960s. The SPRA was loaned and subsequently sold to the Waimea Electric Power Board who used it from 1963 to 1993 to launch feeder lines across inaccessible Tasman terrain for the installation of power cables. Launching the lines saved time and resource by preventing crews from building paths down deep gullies or navigating dangerous river crossings.

The SPRA is a handheld device with a metal barrel, polished brass breech, wooden grip and a stabilising handle at the top. The original kit included three (30cm x 30cm) boxes of 100m x 6mm waxed-coated line which was systematically zig-zagged into each carry-box using guide pins that were removed once the box was packed. Strategically rewinding the line was time consuming but necessary, otherwise the line risked being tangled when the rocket was launched. The line was attached to the rocket on one of its two side wings. The rocket was placed in the muzzle of the pistol and a cartridge was used to fire the pistol and ignite the fuel within the rocket which would launch it 250-300 metres. 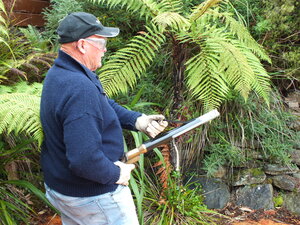 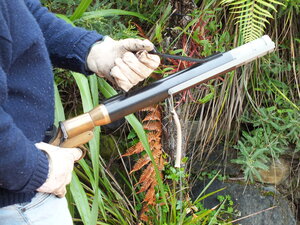 The pistol was held firmly against the hip for firing as shown by former operator Ron Martyn stating “the rocket had one powerful punch with a hot exhaust and cloud of smoke. It was a spectacular sight and very effective.” “Ron Marytn demonstrating how to hold SPRA”. Photo supplied by Ron Martyn. All Rights ReservedThe photograph below shows the smoke trail during a launch over a river crossing in Shenandoah, south of Murchison. This work was undertaken as part of Waimea Electric Power Board’s merge with Murchison Council’s electrical undertaking in 1963 resulting in a large and expensive programme of extending, rebuilding and upgrading power lines in the Murchison area including the Owen, Maruia, Gowan, Matakitaki and Glenroy Valleys.

Although unconventional, other SPRA’s in New Zealand were also used for non-maritime purposes. The Mokau Museum and Gallery in Taranaki for example hold a modified Schermuly launcher used by kiwi innovators Barrie and Gowrie Curruthas in the 1970s to launch feeder wires for television cables from the top of hills, over bush, to remote farm houses below.One benefit of launching a rocket over water is that the heat of the launched rocket and residual sparks from burning fuel reduced the risk of fire. However, when launched in the forest, the fire risk was high so the power crews needed to be prepared with water and extinguishers. As a result, the pistol was retired in 1993 and was mounted in a display case that resided in the offices of Network Tasman until it was donated to the Nelson Provincial Museum in September 2020. Network Tasman Ltd, formerly Tasman Energy, is the modern iteration of several decades of amalgamations of various electrical undertakings in the Tasman region including the Waimea Electric Power Board, Murchison and Golden Bay.The Nelson Provincial Museum expresses sincere thanks to Ron Martyn and Network Tasman for donating the Schermuly Pistol Rocket Apparatus and documenting its story for future generations to enjoy.
Article kindly written by Shae Trewin, Collections Leader.
Click here to find out more…

We're on the hunt for a couple of legends to join…